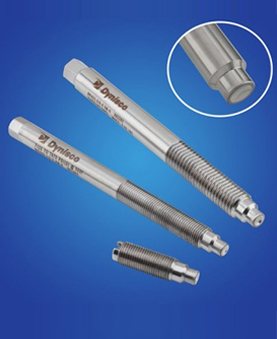 
The Model BP420 burst plugs are designed specifically for use in plastic extrusion systems. Burst Plugs (also known as rupture disks) are designed for reliable, emergency relief of excess pressure in a system. The Model BP420 will instantaneously rupture at a specific, predetermined pressure and temperature. Each one piece assembly consists of a 304 stainless steel body with a welded Inconel rupture disk. The disk is flush with the tip of the burst plug with no cavity for product build up. A burst plug may be specified for primary relief in applications where pressure build-up can occur so rapidly that the response time of a relief valve is inadequate,such as in a polymerization reaction vessel. All burst plugs are tested at rated burst pressure and temperature. In addition, markings on the burst plugs are laser engraved and more visible, and each burst plug is labeled and shipped in a protective package. 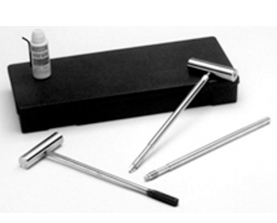 
The cleaning tool kit was designed by Dynisco for use in removing excess plastic from mounting holes for pressure and temperature transducers. Installation of transducers into improperly cleaned or sized holes is one of the major causes of damage to these instruments. With this kit, the .312" tip diameter hole, the 45 degree seating surface, and the .451" hole can be cleaned. The kit includes a gauging plug which is used to verify that the hole has been correctly machined and cleaned. M10 and M18 cleaning kits also available. 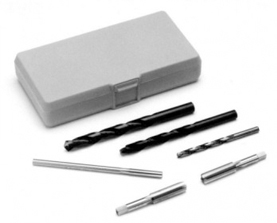 
The Transducer Mounting Hole Machining Tool Kit contains all of the necessary drills and taps to prepare a standard 1/2 - 20 UNF transducer mounting hole. The kit contains the special pilot drill required to machine the 45 degree seat. All tools included in this kit are made of premium grade, high strength tool steel. Care should be taken in the use of proper speeds and feeds, lubricants, and a method to assure continual alignment of each progressing tool. Consult Dynisco for additional or more specific information. M10 and M18 kits also available.


The cable assemblies provide the electrical hookup from the transducer to the display instrumentation. The assemblies consist of a transducer mating connector and a length of shielded, 6 conductor cable with stripped leads.